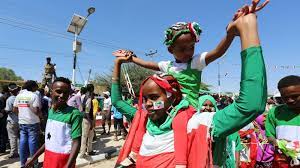 Somaliland is one of the most peaceful regions in Africa, but is also one of the poorest in the world

Somaliland, a de facto sovereign state in the Horn of Africa, is considered by most of the international community to be part of the East African country Somalia.

However, Somaliland still tries to convince the world of its case for statehood since declaring independence in May 1991, i24NEWS reported.

Somaliland has a government, an army, autonomous institutes, its own currency, and is one of the most peaceful territories on the African continent.

Still, it remains one of the poorest regions on the planet.

The lack of recognition exacerbates conditions, cutting off access to foreign loads, aid, and investment.

Despite this, Somaliland – where more than 99 percent of residents are Muslim – holds regular democratic elections and avoids anarchy that engulfs its neighbor Somalia.

Its capital Hargeisa is the second-largest city in the Horn of Africa after the Somali capital Mogadishu, and residents still remember the struggle of war with Somalia to proclaim the region’s sovereignty.

The two countries were not always enemies, though.

In the early 1960s, during the decolonization of the region, then-British protectorate Somaliland and former Italian colony Somalia united to form the Republic of Somalia.

“There was a lot of oppression coming from Somalia… and Somaliland wanted to retreat from the union,” Salma A. Sheikh told i24NEWS.

“It was after a huge struggle where thousands of people died that Somaliland was able to… take its independence.”

Three years ago, Sheikh created The Review, the first English-language news magazine about the country and the first media in Somaliland to be founded and run by a woman

ABOUT US
Horn Cable TV is the leading native broadcaster in the horn of Africa privately owned and founded in 2003 by Mr. Farhan Ali Ahmed, a schooler and a prominent business man. The TV station’s headquarters is in Hargeisa, Somaliland, but it also has branches in Mogadishu, Nairobi and London. HCTV broadcast 24/7
FOLLOW US
© Horn Cable TV 2003 -2022
Go to mobile version