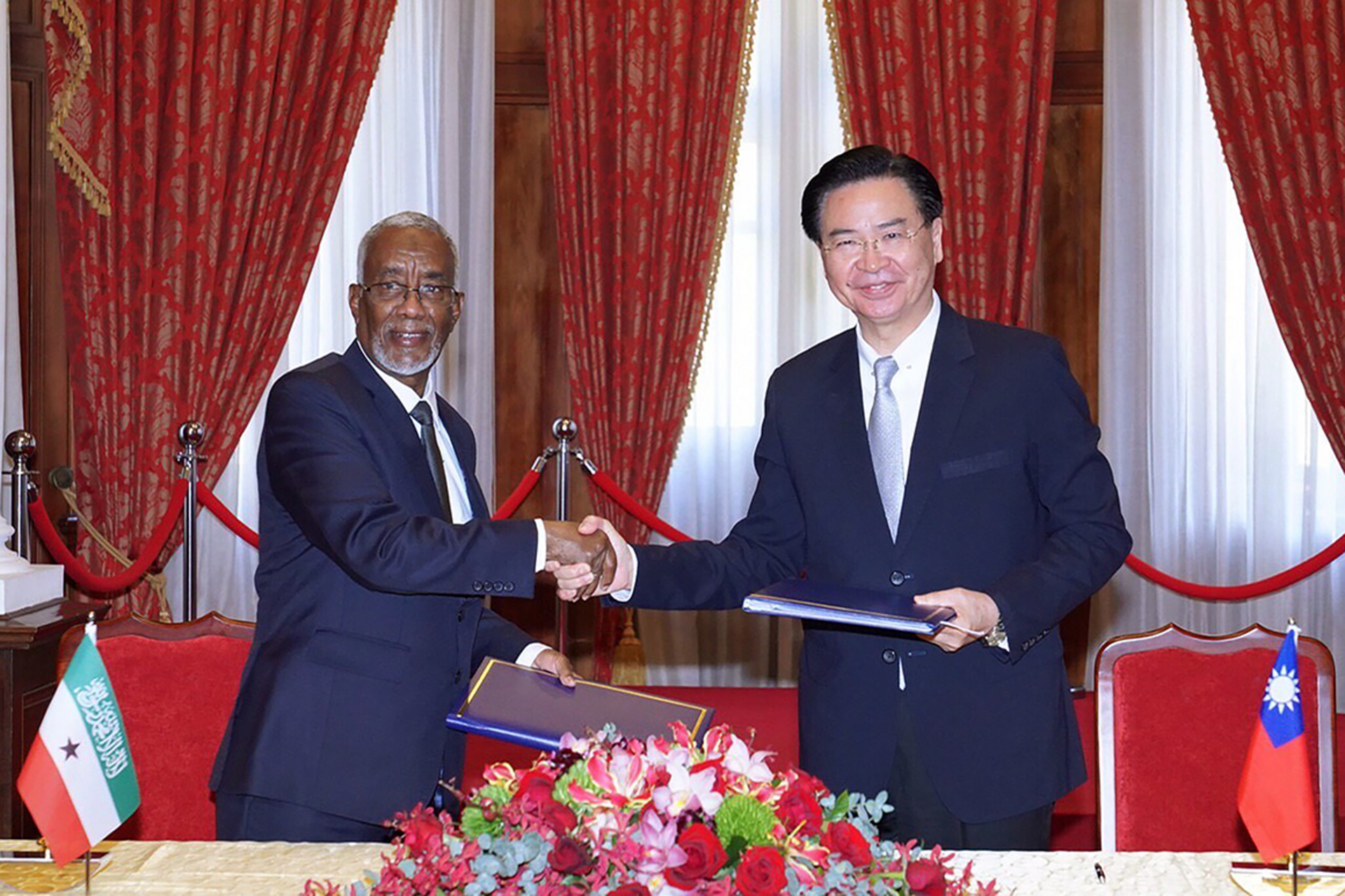 Somaliland’s delegation swept through Washington, promising to support Taiwan and ditch China. All it wants is a little recognition.

As China floods Africa with billions of dollars in development aid, massive infrastructure investment and even talk of a new military base, a tiny East African “country” is offering the U.S. a deal that it says could counter China’s advance.

And Congress is listening.

Last month, a diplomatic delegation from the self-declared independent republic of Somaliland — which broke away from Somalia in 1991 but has no formal diplomatic ties with major developed nations — worked the halls of Capitol Hill seeking sit-downs with whomever would meet with them. The delegation presented itself to U.S. government agencies and lawmakers as an African ally insulated from the instability and China ties that define many of its neighbors.

Somaliland brought solid anti-China credentials to those meetings: it slammed the door on aid and cooperation with Beijing in July 2020 when it inked a diplomatic relations agreement with Taiwan.

That move infuriated the Chinese government because it marked a rare victory in Taiwan’s battle against Beijing’s diplomatic strangulation of the self-governing island.

Somaliland also has geostrategic potential: its location on the Gulf of Aden and deep-water port of Berbera, into which Dubai’s DP World has poured $442 million to build a new container cargo facility, would allow for naval power protection in the Middle East and East Africa. That’s a serious enticement given U.S. Africa Command’s security concerns about its base in neighboring Djibouti: a Chinese naval installation just a few miles away was stood up in 2017.

“We have come to the U.S. to show them that we have the same enemy, and our long-term strategy is we want to be closer to democracies and market economies like the U.S.,” said Bashir Goth, head of mission at Somaliland’s unofficial outpost in Alexandria, Va. “We are countering China [and] the Chinese influence in the Horn of Africa and we deserve [U.S. government] help.”

“As China becomes more aggressive in pushing its debt trap model in Africa — the indebtedness of Djibouti and the transfer of control of Entebbe airport in Uganda provide it with political leverage in these countries — Somaliland becomes increasingly significant,” Tozzi said. “I would hope that the U.S. government will start to deal directly with the government in Hargeisa instead of going via Mogadishu, and join countries such as the United Kingdom, Ethiopia and the UAE in opening a representative office.”

In D.C., Somaliland’s delegation, which included Foreign Minister Essa Kayd Mohamoud and special envoy Edna Adan Ismail, made that same pitch for greater engagement and diplomatic relations when they visited congressional offices in November. They also want the U.S. government to remove Somaliland from its inclusion in the State Department’s “Level 4: Do not travel” classification for Somalia, which is wracked by political turmoil and violence from the al Qaeda-affiliated extremist group al-Shabab. That classification warns of hazards, including “car bombs, suicide bombers, individual attackers, and mortar fire” that are unknown in Somaliland.

“We are a safe country free of al-Shabab and al Qaeda terrorists,” Kayd said — an opinion echoed by the Lonely Planet travel guide company.

Sen. Chris Van Hollen (D-Md.), who serves on the Africa subcommittee of the Senate Foreign Relations Committee, says he’s all-in — not least because of the potential for U.S. access to the Berbera port. The diplomatically isolated territory offers the U.S. a regional bulwark against “China’s efforts to bully its way into various economies,” Van Hollen said.

That may be wishful thinking, given the level of China’s economic influence in Africa. Since 2000, the Chinese government has super-charged engagement through its Forum on China-Africa Cooperation. Chinese government data notes construction of “6,000 kilometers of railways and roads… nearly 20 ports and more than 80 large power plants” across the continent. And that’s not even counting the total investments of Chinese state-owned and private sector investments in African countries, which totaled $4.2 billion in 2020 alone. Chinese President Xi Jinping pledged in December 2021 to increase the value of African exports to China $300 billion annually within three years from a current level of around $200 billion.

Xi’s Belt and Road Initiative has also lavished hundreds of billions of dollars in loans for infrastructure development projects in 40 African states since 2013. Those loans prompted then-USAID Administrator Mark Green in 2019 to accuse the Chinese government of state-backed predatory lending practices, something Beijing denies. China has also expanded military links in Africa through its naval port in Djibouti, a new base planned for Equatorial Guinea and through a sharp increase in training programs for African military personnel since 2006.

“My view is that the United States should be more engaged with Somaliland [and] what we’re looking at is the opening of an office in Somaliland that would include some diplomatic representation… possibly a military liaison,” said Van Hollen. “China’s mercantilist approach to the continent, and the fact that they use their centralized economic levers to exact concessions from these countries [makes] this is an opportunity to expand U.S. diplomatic presence in the region.”

Goth and the Somaliland delegation also met with representatives of the Department of Defense, the National Security Council, State Department and USAID. In those meetings, the Somalilanders made the case that the self-declared republic, a former British protectorate with 530 miles of coastline on the Gulf of Aden wedged between Djibouti, Somalia and Ethiopia, should be the U.S. government’s newest best friend on the continent.

Kayd said that the delegation reached an agreement with U.S. officials “to establish a framework for U.S.-Somaliland cooperation.” That may include allowing USAID to operate regional foreign aid operations from Somaliland as well as a currently undefined U.S. government “presence” in the territory, he added.

USAID, State and DoD offered a more ambiguous account of those meetings. A USAID written statement didn’t disclose any possible plans to use Somaliland as a conduit to neighboring Ethiopia and other African states. State said that in its meeting with Essa, it “expressed a willingness to explore opportunities to cooperate with Somaliland on issues of mutual interest,” a sentiment echoed by DoD, a State Department spokesperson told POLITICO.

All three agencies referenced the diplomatic awkwardness of Somaliland’s strained relationship with Somalia, which still claims sovereignty over the breakaway state 30 years after it unilaterally seceded. They expressed support for the “territorial integrity of the Federal Republic of Somalia, which includes Somaliland” and urged a “mutually acceptable solution on the question of Somaliland’s status,” the spokesperson said. In those meetings, U.S. government agencies “did not discuss on-the-ground presence of U.S. military personnel or equipment” in Somaliland, a senior administration official told POLITICO.

That ambiguity reflects U.S. sensitivities to concerns that greater international engagement with Somaliland might inspire restive regions across the continent, including in Cameroon, Ghana and Tanzania, to redouble efforts to seek independence.

“It has a very strong case [for diplomatic recognition], but its practicalities which are keeping international recognition because the African Union is scared to death of promoting fragmentation of some of its major members,” said Tibor Nagy, former assistant secretary of State for African Affairs.

Somaliland’s answer to that diplomatic impasse is a risky geopolitical chess move: embrace Taiwan. In July 2020, Somaliland and Taiwan sealed a bilateral relations deal that opened the door for Taiwanese investment and assistance and allowed both territories to open representative offices in each other’s capitals. A furious Beijing, which claims Taiwan as part of its territory, reportedly sought to derail that agreement by offering Somaliland’s government sweeteners, including investment in airport and road projects.

But Somaliland stood firm with Taiwan and its offer of less capital-intensive investments in “fisheries, agriculture, energy, mining, public health [and] education.”

That’s been a win for both Taiwan as well as for Somaliland’s efforts to explicitly brand itself as Africa’s sole opponent to Chinese authoritarianism. “We have values and democracy and respect for human rights, and we want to run our government the way we want [so] we prefer to have Taiwan rather than China which is a dictatorship,” Kayd said.

Somaliland’s alliance with Taiwan is also strategic: it seeks to tap the self-governing island’s 50 years of experience in navigating international relations without a United Nations’ seat and with few — and often unreliable — diplomatic allies.

Taiwan’s value has grown in recent months as the U.S. has responded to intensifying military intimidation from China by boosting bilateral ties and inviting Taiwan representatives to President Joe Biden’s Summit for Democracy earlier this month. “The philosophy of the relationship between Taiwan and Somaliland is we’re in the same boat,” said Kayd. “We are both navigating together toward that goal of being countries that are free from China [influence].”

Taiwan sees a diplomatic foothold in Somaliland as an entry point for developing wider and deeper relations with other east African nations. Taiwan hopes such ties can provide some relief from Beijing’s efforts to diplomatically isolate the self-governing island. Taiwan’s diplomatic allies around the globe have shrunk to just 14 since Nicaragua switched ties to China on Dec. 9; its sole other ally on the continent is the monarchy of Eswatini in southern Africa, population 1.2 million.

The U.S. is unlikely to embrace Somaliland with full diplomatic recognition. But given the intensifying geostrategic competition between the U.S. and China in Africa — particularly for the mineral resources that will power the clean energy of the future — time is on Somaliland’s side.

“It took a while for people to realize the threat that China represents in Africa as we move into the 21st century … the United States is coming to this game late,” Nagy said.

ABOUT US
Horn Cable TV is the leading native broadcaster in the horn of Africa privately owned and founded in 2003 by Mr. Farhan Ali Ahmed, a schooler and a prominent business man. The TV station’s headquarters is in Hargeisa, Somaliland, but it also has branches in Mogadishu, Nairobi and London. HCTV broadcast 24/7
FOLLOW US
© Horn Cable TV 2003 -2022
Go to mobile version